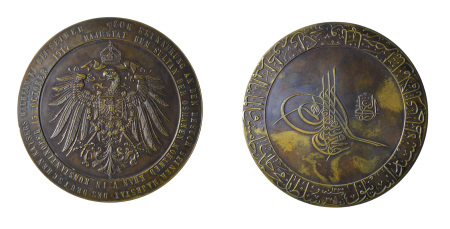 Lot 230
Europe » Germany
Price realised
2’000 CHF
Estimate
2’000 – 3’000 CHF
Auction date
Fri 21 Oct 2016 at 13:30 (Europe/Zurich)
Description:
Ottoman Empire & Germany 1917 (Ae) Medallion for the visit of Kaiser Wilhelm II to the Osmani’s. In 1917 Kaiser Wilhelm, an ally of the Turks, was on a mission across the Ottoman empire where he visited many Ottoman fortifications. His visit to the Dardenelles in 1917 saw the striking of this scarce medallion to celebrate the coming together of The Kaiser and Muhammed Khan V on 15. October 1917 in Constantinople. This was the third time the Kaiser had visited the city, and was always well received by his royal peers. This medallion has the Imperial Eagle of Germany with a German legend dated 15. October 1917. The reverse shows the Toughra and arabic script encircling on the peripheries with the arabic date below. It is housed in the original red box of issue, and is one of only a handful produced as presentation pieces. This medal is scarce and very desirable, with a nice patina. An attractive piece with interesting historic appeal.
Catalogue reference: Extra Fine
Auction
Floor Auction Nr. 1
Catalogue
World Coins