Back to catalogue: World Coins Previous lot Next lot 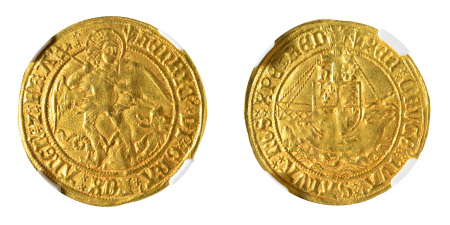 Great Britain (England) (1505-09) (Au) Angel : Henry VII (S-2187) The engraving style changed towards the middle of this reign. The saint was altered to depict him standing with two feet holding down the dragon and he is clad in a combination of feathers and armor, instead of the feathers seen on most previous Angels, giving him a more human look. This example was well struck on a large flan with slightly weaker striking at the centers.