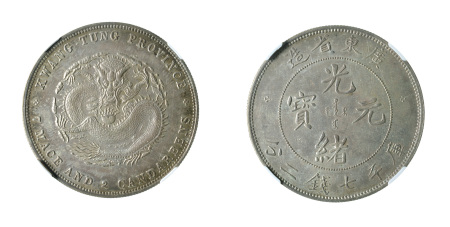 Lot 98
Asia & Australasia » China
Price realised
Unsold
Estimate
5’000-7’000 CHF
Auction date
Fri 21 Oct 2016 at 13:30 (Europe/Zurich)
Description:
China Kwangtung Province (1890-1908) (Ag) Dragon Dollar (L&M: 133) Struck on dies from the Heaton Mint. The Kwangtung (1890-1908) Dollar was the product of designs developed at the Heaton Mint in Birmingham, England, in negotiations with the governments of China and the Kwangtung Province to produce coinage. Several different patterns were produced before the final design for the dragon dollar was approved. Although the circulation issues were ultimately struck locally in China, one variety of (1890-1908) Kwangtung Dollars features a design that is very similar to one of the original designs proposed by the Heaton Mint. These “Heaton Dies” differ from the other dollars in several ways. The rosettes on the coins are different and feature a hollow center on the Heaton variety. The Chinese characters of the Ku-Ping weight system are also different where the center stroke does not connect to the top of the character as it does on the generic dies. The overall strike for this coin is strong. This piece is in a choice grade with smooth reflective fields and tones of blue, olive, gold and lilac which give this rare coin much eye appeal
NGC Certification: 3923106-014
Catalogue reference: NGC Graded MS 63
Auction
Floor Auction Nr. 1
Catalogue
World Coins