The latest investment trend in the techno world seems to be with crypto currencies. We have seen the incredible rise of the value of Bitcoins, and then the influx of many more crypto currencies via pre-hyped ICO offerings (Initial Coin Offer) which appear to be little more than an attempt by start-ups to raise capital to fund their own lifestyles and to cash in on the current speculative trend for these so-called “new monies”.

The crypto currencies have no history to support the claims that people will be millionaires within weeks, and while we don’t doubt the ability of a few of the well-established crypto coins on the market to do well in the short term, their future remains uncertain. Yes, if you had bought a few hundred euros worth of Bitcoin in 2009 you may have made some serious money, but the trend seems to be bottoming out and those that jumped into the market last December are now licking their wounds. 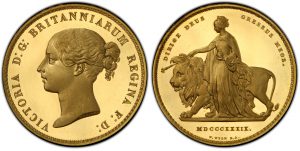 We at Numisor endeavour to provide proven investments in the more tangible market of real coins. Real money which has survived the test of time and continues to steadily rise in value as the simple economics of supply and demand come into play. The interest in numismatics has never been so strong, and now with the extent of information available to potential investors, coupled with the encapsulation and grading of coins by NGC and PCGS it is little wonder that the value of quality coins has gone up and continues to do so.

Real coins can often be traced back hundreds of years, and the appeal of an actual coin in your hand rather than the potential of owning a computer-generated right is of course much more exciting to the collector.

With gold continuing to stay steady with prices fluctuating between $1,290 and $1,380 per ounce, and with iconic rare coins such as the Great Britain gold Una & Lion £5 coin having seen meteoric rises from around £25,000 for an example in 2002 to the recent sale of one for £305,000 in late 2017, there is room for both those looking for a safer investment and also those looking to speculate on rare sought-after coins. Additionally, despite the significant rise in prices of coins of India and China, there is also the undeniable fact that the demand for the limited supply of quality coins from these countries will increase as the wealth generated from their economies continues to create increasing numbers of new millionaires.

We are still noticing the steady rise in value of all rare or high-quality items and look forward to providing more of these in our upcoming auctions.

If you wish to partake in one of our future auctions either as a seller or a buyer, please contact us to discuss your requirements further, and we are always seeking new items for consignment to our next auctions.